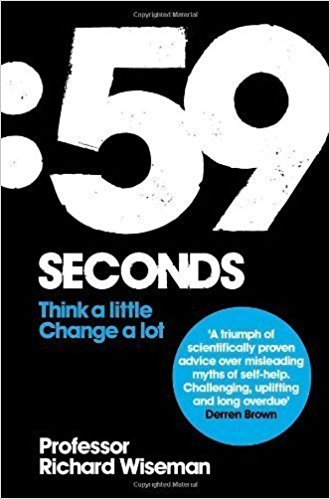 Published by Pan Books, an imprint of Pan Macmillan, a division of Macmillan Publishers Ltd, 2010.

How many of us have read self-help books without much thought to whether the claims made are based on solid and latest research? How many of us have actually managed to apply the advice found in these books consistently and continually? How many of us have stalled along the way because the implementation was time consuming or did not seem to gel with what was going on in our lives?

Richard Wiseman’s 59-seconds books may be a welcome change, as the focus is on the debunking of common myths and misunderstandings plus some down-to-earth tools to quickly make small, but significant changes in our day-to-day.

Much has been written and said about the power of positive thinking. For some of us it may come as something of a relief that positivity thinking is not all it has been cracked up to be. It may even prove to have adverse effects in that the non-positive thoughts we seek to repress may come to occupy much more of our attention than is beneficial. We may be better off exercising disciplines such as giving thanks, focusing on great events in the past or in the future and things that are going well for us. We can also try to better our mood by acting out good mood even if we do not feel that way initially. Research has found that willing ourselves to smile, giving ourselves a good posture and generally act as if we are happy will help us actually obtain a mood in correspondence with these actions. Working from the outside in, so to speak.

How best to persuade other people to heed our request or give us help? In most organizations, some sort of reward/bonus system is in place to “persuade” employees to carry out their tasks. However, research has shown that rewards generally backfire, because they turn employee interest and pride in doing a good job into just plain work effort according to specifications to gain the promised reward. Rewards quickly become as expected as the monthly paycheck. Rewards actually turn off internal motivation. Driving things forward with only the external motivation in place is much more cumbersome. It also puts a lid on creative problem-solving and innovation, as people focus only actions that will ensure they get the promised reward.

Likability is much more likely to get our request heard. To be likeable we must make others relate to us and that takes being a “Mensch”. We do not need to be or appear to be perfect. Actually, appearing perfect rather gives the impression of inapproachability and/or arrogance. We all have warts, at least figuratively, and we would do better to stand by our warts. Our flaws make us human, approachable, relatable and thus more easily likable. Of course, being helpful and being perceived as such will do a lot of good for our likability score. Both giving and receiving favours helps on the likability score, as we tend to help those we like and like those who help us. The best way to start building likability is to start helping others in for them relevant ways.

For many years the value of groups and team work has been praised as the way to achieve most. This apparent truth may need a bit of qualification, though. Groups have been shown to actually perform worse than individuals in idea-generation/creativity and in decision-making. Much of this is due to lack of feeling of responsibility with each individual in the group. The belief can quickly become rife that we do not need to contribute much as the others will ensure the group’s success. When working on our own, we know quite well that there is only once possible stop for the buck, ourselves. We need to enable individuals to work on their own, in their own way and at their own pace to be able to get ideas from each person.

Groups tend to be made up of different personality types, some quite loud and expressive, and some rather quiet and reflective. The ideas and points of view of the expressive and loud group members tend to be the ones that will carry the day, even when these points of view are not the wisest. What is also likely to happen is that the nature of the decision is skewed toward the more extreme ends of the scale; either towards blatant risk-taking or towards utter conservatism. The group in effect becomes an echo chamber, as the group members reinforce and build further on the views of the dominant members.. We need to counter this by enforcing procedures that ensure that all group members feel safe in voicing their opinions, also if these opinions do not carry general backing from other group members. We need to ensure that a rational and logical analysis and decision process is implemented, so as to avoid the floor being carried by the loudest and most expressive individual in the group. We also need to consider whether some decisions are best placed in the group or should be made in other ways.

When a suggestion or idea is repeated often enough, it can end up becoming a belief. However, it is far from certain that the suggestion or idea is actually true or will remain true in the times to come. Some of the popular self-help orthodoxies of past decades have scientific research showing that they may not be as set in stone as we may think they are. Positive thinking, management by rewards and group work are some of these beliefs that can certainly be questioned and alternative measures be applied.

Feel inspired? Have ideas? Need to launch initiatives?
Get in touch with NT Management Consulting today.