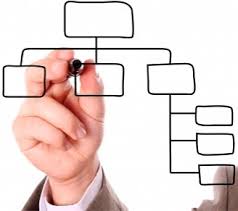 To carry out our project, we need resources. We need to organize and work with these resources in the most efficient and effective ways possible. The key resources for projects are the people resources. If the project organization is ill-defined and/or not adhered to, we add an additional, unnecessary layer of complexity and risk to our project.

How do we set up the project organization that is right for our project?

First and foremost, we need to design our project organization to fit our organization and the project in question. One size does not fit all. Each  principle of organization has pros and cons. Careful consideration regarding which organization principle to pursue is well advised.

Separate organization: The project organization is kept a completely separate entity in the company and refer to a top-manager. This method may be used when projects are high-risk/high value or very out of the ordinary. The pros include avoiding the curse of conflicting double lines of reference (project organization vs line management). Project resources are fully dedicated to the project, which results in  less complexity in time management and administration. The cons include the effort in setting up, maintaining and subsequently disbanding this separate structure. We are most likely looking at adding people to our organisation to replace employees who have been moved fromn operations to the project, or we hire in directly for the project. Projects run as separate entities risk being eyed with suspicion by the line organization, who may fear the outcome of the project. We also risk significant difficulties in change management efforts once the project is to be rolled out.

Matrix organization: Can be used for larger and smaller projects. In larger projects the Project Manager typically refers to the Steering Committee whereas in smaller projects, the Project Manager may be placed in a particular department and refer to a line manager. The project team is composed of employees from a range of departments and possibly external contributors. The pros include that the project team comprises the relevant knowledge areas in a relevant context. Line managers can be kept in the loop and thus our change management effort decreases. The cons include difficulty in getting Line Managers to assign the best suited people at the right time and at necessary capacity. We may also be caught up in inter-line manager power politics. This organizational method will most likely require more administrative and controlling efforts from the Project Manager.

Single department organization: Smaller very narrowly focused projects may be run entirely within one department. The project manager refers to the relevant line manager, and the entire project team consists of members from this department. The pros include the lack of interdepartmental conflicts. We may also assume that the Line Manager will have a closer interest in seeing his department’s project succeed. The cons may include possible lack of complete set of necessary knowledge and competences in the project team. The project manager may also have to contend with the line manager for leadership of the project team. Lack of contact to other departments may inhibit taking advantage of valuable project lessons and may prove a difficulty in the change management processes.

Sponsor – a must. A senior management project champion, who supports the project toward board, other top management and external stakeholders. Should have clout, influence and “selling” ability.

Reference Group – optional: Consists of representatives from different departments, management, recipient groups, suppliers and other external stakeholders, e.g. union representatives. The Reference Group can be called upon to clarify questions and give advice and opinion on project matters. The reference group does not have decision power. Like the Steering Committee, the Reference Group and its members are not involved in the running of the project.

Project Team – a must. Report to the project manager and are responsible for creating project deliverables according to scope and plan. The team is often composed of people from different departments/different expertise, and may also contain external contributors. The project team is a group of equals, i.e. roles and titles from the line organization are not carried into the project. For larger projects, the project team may be divided into sub-teams to work on different work streams. Team members may change as the project progresses and different expertise is required.

We also need to ensure and enforce the relevant setup of project roles, responsibilities and reporting structures. For larger projects the full scale of roles will most likely be needed. For smaller projects we may choose to simplify matters. It remains important that there be no overlap in roles and responsibilities between team, project manager, steering group/reference group and line managers, i.e. clear line of reference and decision power.

Get in touch with NT Management Consulting today.