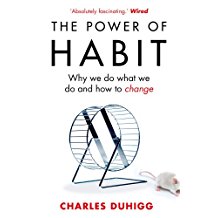 How much of what we do in a day is done completely consciously using our full awareness? How much is done more or less on automatic pilot, because we have done it uncountable times before and we always do it in a particular way? For myself I agree with the findings laid out in Charles Duhigg’s book “The Power of Habit: Why We Do What We Do, and How to Change” that most of my actions during any given day are run on routines/scripts that I do not give too much thought to. I run on habits.

If we understand how habits are constructed, we also put ourselves in a much better position to tweak habits that do not work for our benefit.

Reward: We carry out certain routines/scripts, because we consciously/unconsciously associate them with a particular reward which we have come to crave. The reward may be anything, it can be food/drink, a sense of accomplishment, social interaction or perhaps relief from boredom. Basically, the reward is something that gives us satisfaction and triggers the reward chemicals in our brains. If the reward is appealing to us, is something we crave, we will carry out the steps needed to get the reward.

Cue: As we have a host of habits, we rely on cues to figure out which reward is in the offing and which habit/routine we need to activate to get the reward. A cue can e.g. be location, time of day, our emotional state, other people or any action we have just carried out. So, for instance every Wednesday afternoon you go grocery shopping and when there you always pick up and consume a large size sugary beverage. The reward involved could a sense of treating oneself (sugar craving) or it could be treating a feeling of peckishness (hunger).

How do we update our habits, if the activities we carry out are not beneficial for us (anymore), but the reward is still something we crave?

Charles Duhigg says that we need to keep something familiar at the beginning and the end of the habit loop whilst changing the middle part. The cues and the reward need to be fairly close to the cues and rewards from the existing habit to make changing the actual routine/script we carry out something that we can accomplish and stick with.

Let’s say that the amount of sugary beverages consumed has added a bit to our waistlines. If we want to get the reward we crave (a sweet treat + relief from peckishness), we can look for artificially sweetened beverages or switch to eating a piece of fruit. So the cue is kept intact (Wednesday afternoon, grocery shopping) and reward is still getting a treat and helping out our sugar and food cravings. However, the routine is changed: the treat consumed is of a different kind.

Organizational habits exist to help us deal with uncertainties and to ease cooperation between different divisions, departments and even individuals. As long as these habits are founded in a true justice and balance between the parties and make it clear who is in charge at the end of the day, these habits can support the organization and help it thrive. If however, habits are based on one division, department or individual's exclusive needs and priorities, the habits are unlikely to be helpful to the organization.

When the organization faces a crisis it is the best time to influence and change existing habits, according to Charles Duhigg. When a crisis looms, the organization and its members become more open to making changes in order to weather the storm. In some ways this calls to mind the “Burning Platform” much spoken of in various change management theories.

Some leaders may play up a crisis or go as far as invent a crisis to enable changes that are seen as necessary in the organization. Whether inventing crises is a wise move is a question. However, making sure that the organization understands the potential impacts of an existing crisis and is given the belief that doing things differently is indeed within reach is often the cue for making changes to business as usual/habits.

Much of life, be it private life or life in organizations, runs on habits. This is great because it allows us to conserve our brainpower and willpower for the relatively small amount of items that require awareness and closer consideration. However, we must continually keep in mind that our habits are the best possible way for us to achieve the rewards we aspire to whether that be personal growth or a thriving organization. A crisis may well present an open and shut case for us to change our ways. However, awareness of the programming of our automatic pilot: the cues, the routines and the rewards, allows us to tweak our habits on a more incremental basis – making change itself a habit.

Feel inspired? Have ideas? Need to launch initiatives?
Get in touch with NT Management Consulting today.